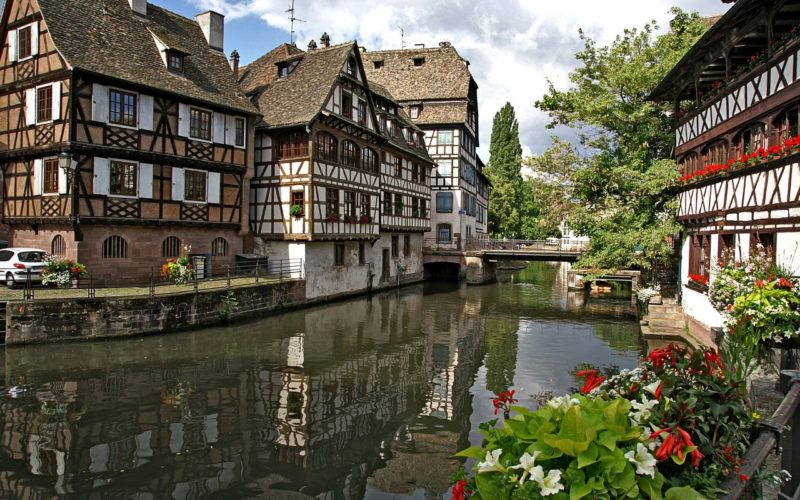 Alsace in France is all you could ask for in the perfect walking route. From parks, gardens, nature reserves, the Ballon d’Alsace, the renowned Wine Route, Alsace offers a breath of fresh air. As a huge nature lover, I came across this and knew it was a place I would love to visit. There are 21 nature reserves in Alsace, France – perfect for people looking to be one with the French wilderness. So I had to go on a walking holiday in the Alsace.

Exploring Strasbourg in the Alsace

Our first day was arrival day in Strasbourg, France. This was a day to explore and adjust to the time change before we started our journey. Strasbourg is the largest city, as well as the capital city, of the Grand Est Region of France. It is located right near the border of Germany. Strasbourg is home to the Cathedral of Notre-Dame, a famous masterpiece of Gothic Art. The richness and quantity of the historical landmarks is the reason the entire town is a UNESCO World Heritage site.

Day 2 we spent exploring Strasbourg more. There is so much to do. We enjoyed the Kammerzell house, which was a journey back in time. It is a medieval civil housing building that is still beautiful, highlighting the late Gothic architecture. There is also the Petite France quarter, also known as the district on the waters and the Church of Saint Thomas to check out while you are there.

The entire city is well worth visiting and hanging out in with its historic atmosphere and restaurants serving fine cuisine every corner you turn. Strasbourg is also one of the only cities in the world home to international institutions, without it being a national capital, such as the Council of Europe, the Human Rights Building, and the European Parliament. We take a train to Obernai, which takes about 30 minutes, where we find our accommodation for the night.

The village of Obernai brings us to wine country- the heart of vineyards and wine culture. This is an authentic, age-old tradition in Alsace, France. The Obernai region was once the property of the dukes of Alsace in the 7th century. It was the birthplace of the Patron Saint of Alsace, who was the daughter of the Duke. Her name was Odile. There is a spiritual shrine dedicated to her at the top of a hill, Mont St. Odile. This is home to amazing views of an exceptional natural and archaeological environment.

It is very easy to navigate this area as there are marked paths for hikers – where we often found many meditating because of the calm and peaceful nature of this area. We continued on to find the Château du Landsberg, which is a castle that’s construction dates back to the 12th, 13th, and 15th centuries. The castle is currently privately owned. It is a “Monument Historique” since 1965. We then continued on to arrive in Barr, followed by Andlau, where we spent the night.

The village of Andlau was founded as a result of settling due to the Andlau Abbey in 880. The authentic village in the Alsace, France is famous for its former collegiate church, Saints-Pierre-et-Paul, which is now the parish church. There are two castles in the vicinity of the town. The Château d’Andlau was built in Andlau from 1246 and 1264. The other, the Château de Spesbourg, is located in the hills above Andlau. This one was built between 1246 and 1250.

The route we took to reach our destination for the night was riddled with vineyards as far as we could see. The castles spread out on the top of many of the hills we pass. We had wonderful panoramic views of the Alsacian plain, as well as the summit of Undersberg, Bernstein, Ortenbourg, and Ramstein ruins. These castles count as Monument Historique- and have been for almost 90 years. This route brought us right to Châtenois – our resting place for the night.

Châtenois is a city of Celtic origin that falls right at the top of two valleys in the Vosges. The city is right on the wine route, so be sure to take advantage of the fine wines this place has to offer. We sure did! There are two remains that still stand, the Witches Tower, from the 15th century and the Church of 1759. The Church of 1759 houses a magnificent organ Silbermann from 1765. Alsace in France is full of amazing history.

We continued on the path that brought us to the next stage of the walk to reach the Château du Haut-Kœnigsbourg on a high hill. This overlooks the beautiful Alsatian Plain. The castle is another Monument Historique, since 1862. The German Emperor, Wilhelm II rebuilt the castle in 1899. We continued on to go over the Schaentzel Pass that continued to our destination for the night, Thannenkirch.

The Picturesque Village of Thannenkirch

Thannenkirch lies right below the Taennchel mountain and is a classified zone of tranquillity and silence. The village has an authentic character and pure simplicity. There are a thousand flowering cherry trees throughout the city.

You can admire the blooms in many of the villages orchards. Today was only to take a little over 4 hours, which left us plenty of time for visits around a few small towns such as Ribeauvillé, Riquewhir, and Kayseberg. There were relics of the past on our way because of the ruins of several castles, Château du Haut-Ribeaupierre; Château Saint-Ulrich; and Château du Girsberg.

The town of Ribeauvillé is beautiful with ancient walls and unique architecture. We enjoyed looking at the many medieval houses that the town housed, as well as the two medieval-Gothic churches, St. Gregory and St. Augustine. We continued on our way until we reached Riquewihr.

This is a romantic medieval city. There is varying terrain that makes the city uniquely beautiful with amazing views of both vineyards and mountains. The city is home to historical architecture and great wine- especially the Riesling. The village is among the Les Plus Beaux Villages de France, which means, the most beautiful villages of France association. It definitely deserves its spot in this group, as it was great fun.

The Final Stretch in Alsace in France

Our last day we spent traveling from Kayersberg to Colmar. Kayersberg is on the wine route and one of the most beautiful cities on the route. There is a high fortress that looks over the city, serving as a constant reminder of the strategic importance and warlike past of the city. Pre-WWI Kayersberg was a German city. Our morning was free which gave us the opportunity to visit the town and explore its unique and rich history.

We then took a bus to Colmar, which has the proud name of the Capital of Alsatian Wine. This town is exceptional due to the wealth and variety of the history and architecture. There are many significant sites in this town to visit such as Saint Martin’s Collegiate Church, the Dominican Church, House of Heads, and Voltaire’s Residence.
Day 8, it was time to leave. We took a train from Colmar to Strasbourg, where we transferred to Strasbourg-Entzheim airport. This airport was very convenient because it was only 12 km west of downtown Strasbourg.