Hadrian's Wall Walk through the Roman Empire in the UK

A fortification made by the Roman Empire and still exists: Hadrian’s Wall Walk.

So you must visit Hadrian’s Wall, a master wall built from coast to coast in Britain. With 135 km, Hadrian Walls also marks the division between England and Scotland.

It is the largest roman monument that still exists in England and a UNESCO Heritage site. 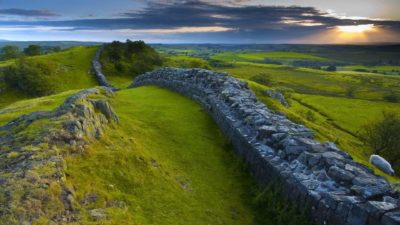 The wall was built as a request of the Roman emperor Hadrian in 3rd century, after his visit to Britain. The main purpose was to separate the Romans from the Barbarians. It goes from Wallsend (NewCastle) in the east to Bowness-on-Solway in the west. It took approximately 6 years to be built.

The material used in the wall varies from what they have in that part of the country. The main material is rock, with some parts made of turf. The wall height was varying from 3 up to 6 metres high.  In the central area of the wall it used to be 8 metres high. The plan also included a gate every mile or two and observation towers in the middle of the wall.

There were around 14 fortresses added along the way to defend the wall that were able to be occupied by 500 to 1000 soldiers.

Hadrian’s Wall is an easy trail to do a walking holiday. Most of the people take six to seven days to do the path with no need of extra equipment. Since the trail has many fortresses along the way, it is perfect for those who like to do a calm walk and enjoy the view and the history you will find here.

Since the wall crosses Northumberland, which is one of the wildest counties in Britain, Hadrian’s Wall crosses through it. So you can expect to enjoy some of the biggest native fauna and flora of the country along your way. If you go during spring you see a stunning path full of flowers in some parts of the trail. 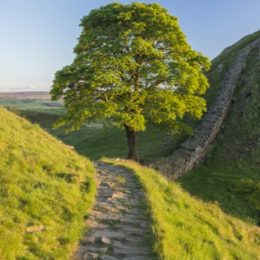 Hadrian’s Wall has 6 sections, always beginning and finishing in a town near to one of the fortresses.

Wallsend (Newcastle) – the beginning of the walk, is in the north-east of England. Newcastle started to develop during the Roman settlement. The first group of people in the area were there to build Hadrian’s Wall. But it has this name due to the construction of a castle built by William the Conqueror’s eldest son.

Heddon – a small village located near Hadrian`s Wall. In ancient times there was a Roman milecastle here, but there are no traces visible today.

Steel Rigg – the “must see” spot. There is a sycamore tree located in a dramatic dip with Hadrian’s Wall. In 1991 this area became famous due to the film `Robin Hood – Prince of Thieves`, with Kevin Costner and Morgan Freeman. Since then it is called the Robin Hood tree.

Banks – the best preserved site in the western sector is in Banks. There is an original observation tower. The tower was made on the orders of Hadrian himself and it was made from turf. 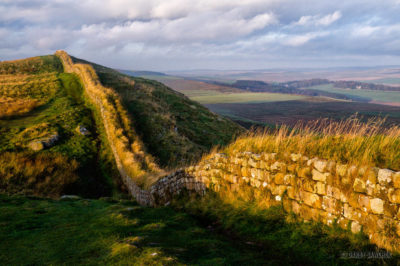 Carlisle – during the Roman times, Carlisle was called Luguvalium. It was an important city with one of the Hadrian`s Wall Forts. Here in Carlisle many battles happened between the English and the Scots. Now, Carlisle is a vibrant city, with museums to tell their history, galleries, theatres and events.

Bowness-on-Solway – The western end of Hadrian`s Wall. The village grown on the site of the Fort Maia, made by the Romans as the last fort of Hadrian`s Wall. It is also the place of a natural and important park, which is an amazing place for walking and cycling. In this area there are lots of nature reserves nearby to visit and enjoy the final moments of your trip and to absorb the fresh air and beauty of the place.