When I was looking into my summer holiday, I was trying to find something different. I wanted to go on an adventure, but I also wanted to see amazing scenery and maybe even learn something new. That is why I decided to book a week-long trip to embark on the Tenerife Guided Tour, just off the coast of Spain. This trip had everything, from dolphins to hiking to shopping and historical tours!

When I arrived at the Los Rodeos airport, I was ready to go; the only problem was that the scheduled activities did not start until the next day. I headed out to my hostel, and figured out where in Tenerife I wanted to explore on my own. Since I was planning on taking the historical tour on Friday, I spent my free day wandering around the streets.

It was really exciting to see the island life, and to experience the ebb and flow of the area. I tried my best to seem casual, but I had to snap photos of all the historically beautiful buildings that I saw.

After about four hours of wandering around, I sat down an adorable café to eat dinner. Since I had an early, hike-filled day the next day, I headed back to my hostel after my laid-back dinner.

Once I had finished breakfast, I was ready for everything that the day held. The day started in a small village called Masca. After a little down time in the city, the hiking tour group set out for the hike to Masca Canyon. The hike was a little strenuous at times, but for the most part it was an easy hike. Since the trail constantly headed downward, I had a chance to take in the scenery while I was hiking.

A few hours of hiking and we reached the gorgeous bay of Masca, where everyone decided to take a much needed swim. I, however, was much more excited for the dolphin cruise that followed. We all hopped into a boat and set out to sea, and saw a ton of dolphins!

The day ended when the group returned from the boat cruise. Once again, I found a small restaurant, and enjoyed a peaceful dinner before retiring to my hotel room. 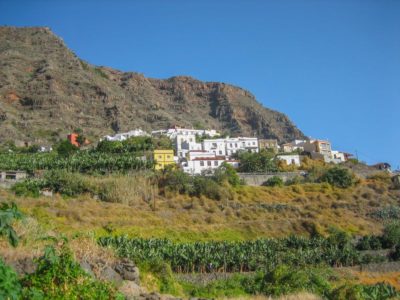 I woke up bright and early to catch the boat to La Gomera, where I was spending the day. It was an easy boat ride, taking about an hour. Once we reached La Gomera, the group set off to the Garajonay National Park. It was absolutely wonderful, because we got to hike through a rain forest. In contrast to the other hikes I have done in my life, the hike through the Garajonay National Park offered much different scenery, since it is mostly a rainforest.

The hike also took the tour group through more remote villages, so I also got the chance to see the more rural, island lifestyle. By far one of the easier days of the trip, after the hike, I opted for the optional transfer to Los Gigantes, so it was a stress-free experience.

Since there were two choices for how to spend the day, I decided that I would take the trip to Cueva del Viento, where there were caves!

It was a relatively easy day, in regards to the hike and to the caves. We took a bus for about an hour, and then hiked for thirty minutes up to the caves. Since the tour was guided and there were several families in attendance, the tour of the caves was also very easy. It was fascinating to see the effect that lava had had on the caves over the years. Every person had a flashlight, so I was able to focus in on the parts of the caves that I most wanted to see.

Once we were done in the caves, we headed to the bay of San Marcos, where we had snacks. It was a very relaxing way to end the day, even though the day was relatively easy.

Since the tour for Wednesday was very similar to Sunday, I opted to stay behind. So, I explored a little bit of the island on my own. I made a stop at the Botanical Gardens, before heading out to do some much needed shopping. Also, I started out window shopping, but so many of the shops were very welcoming, so I ended up buying more than I should have!

Because I was on my own clock, I ate both lunch and dinner out in the city. I did a lot of walking, but that is because I wanted to see as much of the island life as possible. By the end of the day, I was ready to grab a glass of wine and sit back to relax.

Quite possibly the most difficult, yet rewarding days was Thursday. The plan for the day was to hike up to the Mont Teide summit and ride a cable car down. Our hike up took around three hours, and involved some hard core hiking. I really enjoyed the challenge, and the amazing scenery made the challenge worth it!

Once I reached the top of the summit, I simply stood there to take in the view. Simply breath-taking. I got to see the other Canarian islands along with stunning views of Tenerife itself.

One downside of the day came when we tried to take the cable car back to the city. Unfortunately the weather started to take a turn, so the cable car was not being operated, which meant we were hiking back down Mont Teide. Two and half hours later, we reched the bottom, and I was exhausted. Like I said, the views and the scenery made the hikes (both up and down) worth it!

On the last day of the trip, I took the historic bus tour of La Laguna, which was a relief after the intense hiking from the previous day. I learned a lot about the history of La Laguna and had the chance to see many cathedrals, monasteries and churches. The tour stopped for lunch and light shopping, which of course I participated in.

After lunch, the tour headed to Anaga on a mountain road. I was not happy with the idea of mountain climbing, but it turned out to be an easy stroll along a well-established path. The tour made a stop at Mercedes Forest and Cruz del Carmen.

The day ended with a wonderful drive from the ridge of Anaga to the beach of “Las Teresitas”. Overall, it was a much easier day than the previous. It was also a great way to end my holiday trip to Tenerife!

To learn more about Tenerife Guided Tours or the other Canarian Islands, please click here or contact us today!